Since 1938, Fluorescent lamps have been produced and sold to the public. These lights work by ionizing mercury vapor in a tube that emits photons that produce visible light. A large majority of facilities still use these dated lamps which creates several disadvantages for their businesses. As newer and more efficient lighting options have emerged, we have found many reasons to avoid using these lamps. Continue reading below to learn about these reasons and how fluorescent lighting could be negatively impacting your business.

Tired of receiving expensive utility bills in the mail every month? What if I told you that you could reduce your lighting cost by 70% which will drastically reduce your utility bill. That’s right, fluorescent lamps use up to 70% more energy than modern LED lights. They use a significantly higher amount of energy (Watts) to produce light making them extremely inefficient. By replacing these lights with LEDs, you will effectively reduce your energy consumption which in return, will lower your monthly utility bill.

Fluorescent lamps last around 10,000 hours on average. An office space that is has lights on 10 hours per day, 5 days per week would have annual run hours of 2,600. This means that every 3.5 years, the office would have to replace their lamps. Replacing lamps is costly and takes time away from your facilities team that could be focusing on more important tasks. On the flip side, LED lamps last around 50,000 hours on average. If they were installed in the same office, they would only have to be replaced every 17.6 years. Therefore, during the lifespan of one LED tube the office space would be purchasing and replacing their lights 4 times! As you can see, the cost of maintaining fluorescent lighting quickly adds up and can put a burden on any business.

Fluorescent tubes fitted in troffers are the most common application for these lights. Since these tubes degrade so rapidly and most troffers fit 2-4 tubes, they can look quite ugly and make a space look dim. To the right, you can see an example of a troffer fitted with fluorescent tubes that are degrading. The tubes vary in light output because they have been replaced at separate times giving the light fixture a dirty and cheap look. 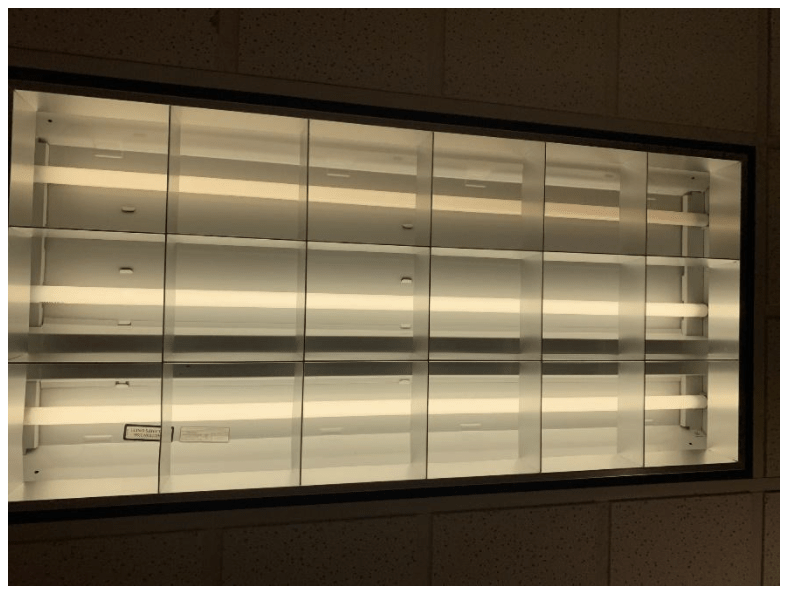 LED flat panels are a much smoother source of light while being significantly more efficient as discussed earlier. Quality optics and lenses create a clean and even presentation that makes any space look clean and modern. To the right, you can see an example of a RAB flat panel that we commonly install for our customers. 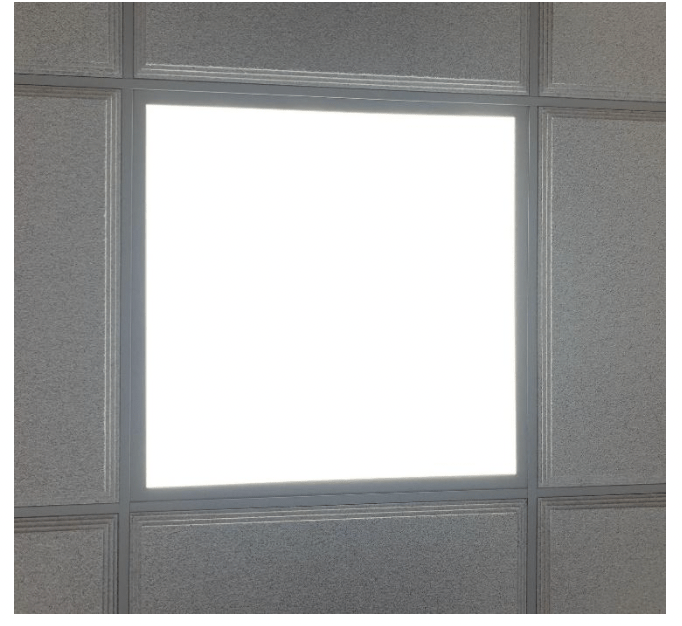 Over the past few years, we have seen an explosion in lighting technology specifically in controls. Fluorescent lighting has been left behind amidst this growth while LED technology has seen many advances in customization and control capability. Control enabled LEDs offer many features that including daylight harvesting, occupancy sensing, task tuning and more. Learn more about these LED control systems and the features they offer in our blog here.

As stated in our introduction, fluorescent tubes utilize hazardous mercury vapor to produce light. Since they contain this hazardous gas, a broken fluorescent tube can create serious health hazards to those who are in the vicinity of one. Glass is used as the tube portion of these lights which are prone to shattering as well. Furthermore, fluorescent tubes produce radioactive light waves such as U.V light which has been shown to be harmful to humans.

Employee health and safety is a top priority for any business, we highly recommend replacing your fluorescent tubes to create a better environment for your employees. One broken tube near an employee could result in serious risks for any company.

Overall, fluorescent lights are over 80 years old and haven’t seen much advancement in recent years. If you still utilize these lights, we highly recommend you making the switch and taking advantage of the modern, safe and efficient LED lights we have available today. This may sound like a daunting task, especially if you have a large facility which we understand. That is why Integra LED offers turnkey LED lighting upgrades including everything from securing incentives to product installation.

Power over Ethernet or POE lighting is a lighting system that is connected and powered using ethernet (Cat 5/6) cables. Since LEDs now require such…

The number of electric vehicles on the road is expected to reach 18.7 million by the year 2030. As electric and plug-in hybrid vehicles have…

Tenant Attraction  If you own a commercial or residential building, attraction and retention of tenants is extremely important for the financial health of your investment.…